Humble Inquiry, Second Edition: The Gentle Art Of Asking Instead Of Telling (The Humble Leadership Series) 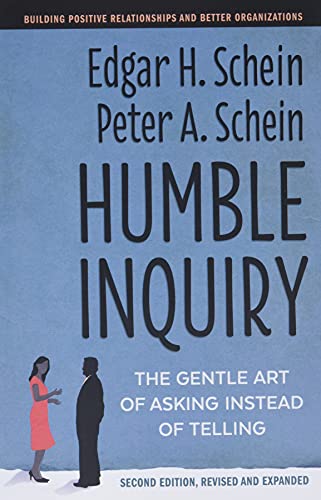 Finished this book about a month ago but it's taken me this long to write a review about it because I have such mixed feelings about it. It was a deeply affecting novel, but mostly not in a good way. I really wanted to like it, but the more I think about what I didn't like about the book, the more it bothers me. I even downgraded this review from two stars to one from the time I started writing it to the time I finished.
Last updated 22 mins ago

I know a lot of us were expecting Humble Inquiry, Second Edition: The Gentle Art of Asking Instead of Telling (The Humble Leadership Series) to be good, but I have to say, this book actually exceeded my expectations. I have a lump in my throat and I can't stop thinking about it. I usually spend time making detailed notes while reading a book but, at one point, I opened Notes on my computer just to type "this is so good"
Last updated 30 mins ago

A short but w lovely book for fans of both authors, but also a lot of insight into freedom of speach, creativity and the importance of libraries.
Last updated 2 mins ago