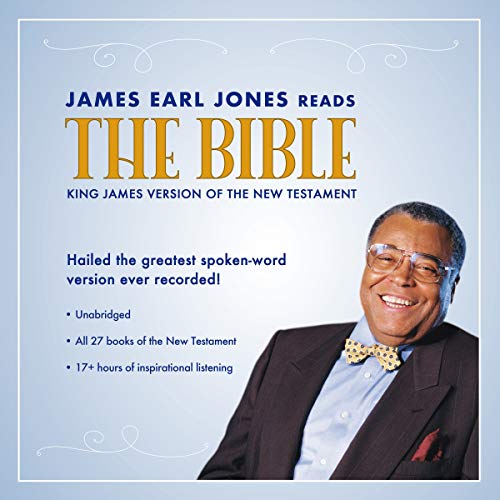 Because James Earl Jones Reads the Bible: The King James Version of the New Testament is adored by most people who read it, I am forced to conclude that most people need to read more. A whole lot more. You should be embarrassed if you like this book. Seriously. The moment I became a book snob, I became so embarrassed to be seen reading it that I accused the guy sitting next to me on the subway of putting the book on my lap while I wasn't paying attention. "How dare you, sir! Have you no decency?" I exclaimed excitedly in my native language.
Last updated 6 hours 37 mins ago

I know a lot of us were expecting James Earl Jones Reads the Bible: The King James Version of the New Testament to be good, but I have to say, this book actually exceeded my expectations. I have a lump in my throat and I can't stop thinking about it. I usually spend time making detailed notes while reading a book but, at one point, I opened Notes on my computer just to type "this is so good"
Last updated 37 mins ago

Finished this book about a month ago but it's taken me this long to write a review about it because I have such mixed feelings about it. It was a deeply affecting novel, but mostly not in a good way. I really wanted to like it, but the more I think about what I didn't like about the book, the more it bothers me. I even downgraded this review from two stars to one from the time I started writing it to the time I finished.
Last updated 7 hours 38 mins ago